You ready for a story? Here goes…I’m going to do my best to give you a visual of the most adventurous shoot I have ever gone on. : ) The day after Lyndsey and Travis’ wedding in Cabo, we headed out BRIGHT AND EARLY… like 5:30am… to the very famous Lover’s Cove to shoot their Trash the Dress shoot. To get to this exotic location, you must take a boat. Well, the problem was… that early on a Sunday morning it was impossible to find a water taxi to get us there. Apparently these taxi drivers like to sleep in a little on Sunday? HOW DARE THEM!! Our predicament was we were crunched for timing as I like to shoot at a very particular time in order to get the best lighting. So we started to get a little worried we wouldn’t make it to the spot in time. After doing lots of persuading in Spanish (on my part) with a local at the boat marina, he managed to talk a local fisherman to take us out to Lover’s Cove on his fishing boat. Whew! So Lyndsey, Travis, Deirdre and I hopped in this tiny (and smelly) fishing boat… wedding dress on and equipment in hands. That was the easy part. The boat ride was about 5 minutes away from the marina. As we arrived, we realized how incredibly difficult it was going to be to get out of this tiny boat without getting completely washed away. The tide was pretty rough and as you may already know, the bottom of a fishing boat is shaped sort of like a canoe, not flat on the bottom (like a water taxi is!!), which makes it rock back and forth a LOT. The other tricky thing, is these the two Mexican fisherman that drove us out there were elderly and having a very hard time pulling the boat into shore. Travis hopped out the boat to help him try to pull it in, but even with two men, the tide was SO strong… needless to say it was pretty scary. As soon as a wave pushed the boat in, Lynds, D and I all jumped out as quick as we could… trying not to ruin the equipment. It was interesting to say the least, but we managed to make it. The fisherman yelled to me in Spanish that they would be back to pick us up in an hour. So we had to hurry.

The thing about Lover’s Cove is you have to be dropped off on one side of it because the other side where the arch is at, is even ROUGHER with the tide. And I mean, like killer waves. Boats cannot even go on that side. So as soon as we were dropped off, we had to trek it to the other side with all of our stuff. As we got closer to the arch we began to lose sand area to walk on next to the cliffs, so we would have to wait until a wave would recede into the Pacific and then TAKE OFF RUNNING LIKE YOU WERE RUNNING FROM AN AX MURDERER before the water would come back up. And you think I’m exaggerating… um no. We were DETERMINED to get to that arch!!!! Especially Lyndsey, you should have seen her… she had that dress in arms and was running like a madwoman across the sand to the other side. Haha LOVED IT. Such an adventurous bride. : ) SO…. we finally made it the arch… out of breath, and about to pass out… but we made it!!!! At this point I knew I only had a very short window to get some amazing shots, not only because of lighting… but I knew our boat would be back before we knew it and we did NOT want to get stranded. So we quickly starting shooting and I got some of my favorite shots ever. This location was just breathtaking. There was not a single soul there besides us (and a few sea lions!!) It was truly surreal. Have you ever seen the movie The Black Stallion? I was obsessed with that movie as a child. When I was at this location, it made me think of that movie and the part where the little boy is stranded on the beach with the black stallion. It was just one of those moments I will never forget for as long as I live. Mind blowing, majestic, like a dream, marvelous, stunning are just a few of the words that come to mind when thinking of this beautiful place that God created. I feel incredibly blessed that I had the opportunity to be one of the few people on earth who got to see it. We were told for 7 years the tide is high and there is actually no beach to even be on. And then for one year after every 7 years, there is beach. We were lucky enough to have been able to visit it on that ONE YEAR!! Crazy amazing. Most people don’t have that opportunity. Innnncrreeeedddible. Truly.

As we finished taking a few photos on that side, Deirdre pointed out that we should probably make a mad dash back to the other side just in case the tide got higher, and we would get stuck on that side, with no where to go. YIKES. We grabbed our stuff and did the RUN-FOR-YOUR-LIFE dance again. We made it back to the other side safe, and again, out of breath. We spent a little longer capturing some more amazing shots and then saw our fisherman coming back for us. Heeerrreee we go again!!!! Needless to say, this time the waves were more rough than when we were dropped off and I knew getting back on this little boat was going to be even more difficult. As we stood on the beach watching them struggle to get the boat close enough, we all started to get a littttllllle nervous. The boat was rocking back and forth vigorously and at one point almost completely flipped over. As we watched these 2 fisherman fighting the waves, we all had our lives flashing before our eyes. “Is THIS how my life is going to end!?!” I waited for a “calm” moment and we all made a dash for it and hopped in the boat as fast we could all while holding equipment above our heads and trying not to trip and drown. SCA-RY. As we all got in the boat, the waves continued to crash near the shore while the boat was going BACK AND FORTH… and at one point it almost flipped over. There is no doubt we were all screaming at the top of our lungs and I am pretty sure Deirdre and I were using words our mothers would not approve of. It was THAT SCARY. All I could think was, “this boat is about to flip over, hit us on the head, knock us out… and we are done for.” But it didn’t and we got back out to the ocean, where it was much calmer. All of us were wet, smelled like fish and extremely shaken up. BUT HEY, WE GOT THE SHOTS AND MADE IT OUT ALIVE!!! WOOHOOO!!!!! Then the fisherman begins to tell me in Spanish, “now hey, since you speak Spanish… if the police ask, you’re my sister. Because I am not licensed to take people out.” BAHAHAHAHAA. Perfect way to end this insane adventure… worrying about getting arrested in Mexico. Nice.

Even though it got seriously scary, it was so worth it. We all got to witness one of the most beautiful places ever and take some incredible photos that ALL FOUR of us will cherish and remember forever. I am so glad all 4 of us possess a spirit of adventure, otherwise we wouldn’t have been able to make any of this come true.

Thanks Travis and Lyndsey for just being simply put, RAD. Many hugs and kisses to you both! 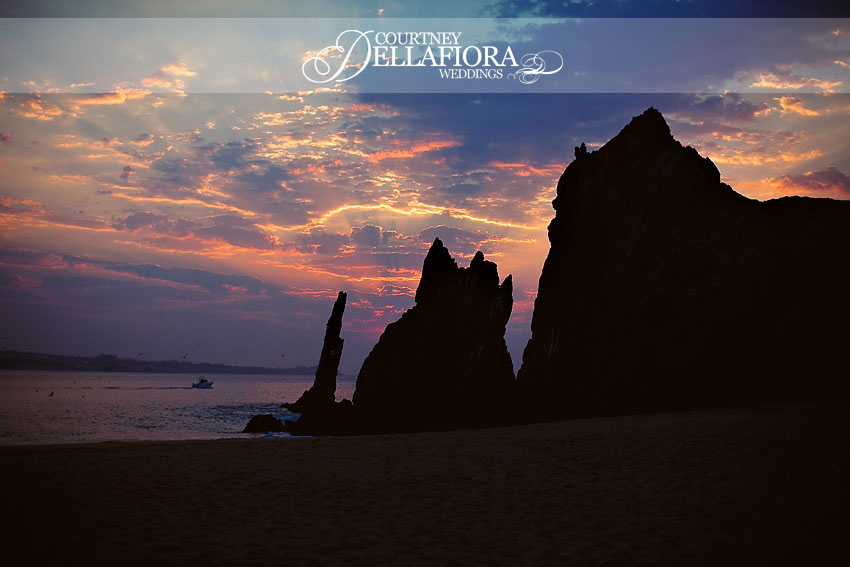 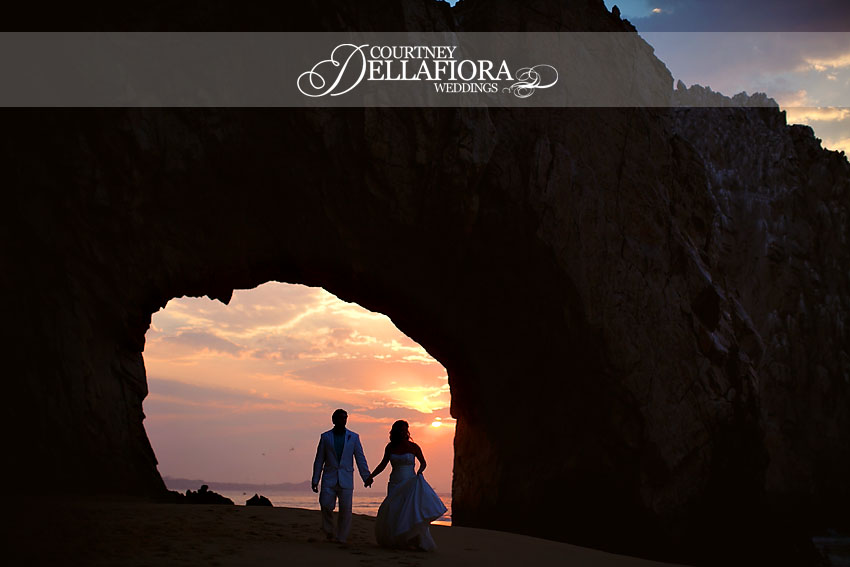 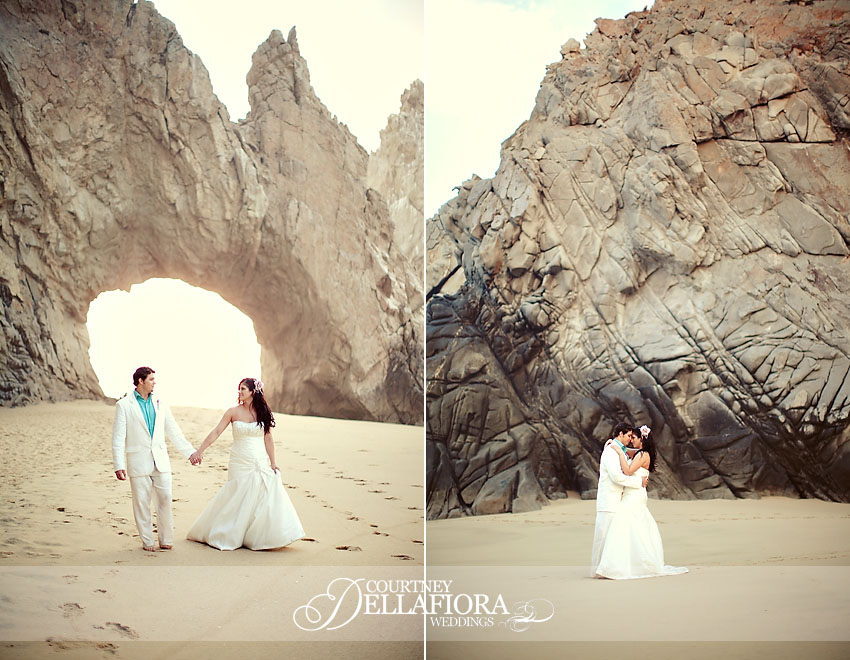 And just to give you an idea of what Lover’s Cove NORMALLY looks like 7 out of 8 years, here is a photo I grabbed off of Google. See, no land.